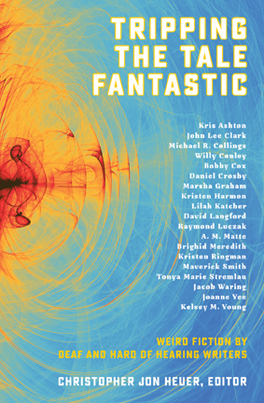 Preorder your copy now
(with FREE shipping)
and get it by mid-September!

(For international orders and PayPal users, please use this link instead.)

From haunted Civil War battlefields to a severed ear discovered on a nightly run; from lab-grown dinosaurs to forest creatures that steal away children under the cover of night; from deadly bio-engineered fleas to a burning teenage desire for cybernetic amputations: Deaf and hard of hearing authors from around the world bring you this fun, though oftentimes disturbing, collection of short fiction.

“Even for someone like myself—a hearing person who has long been around the Deaf community—this anthology often gives insight into a series of deaf characters in a way perhaps no hearing writer ever could, from reading the innermost thoughts from a Deaf perspective in thriller/horror to science fiction and fantasy, and every genre in between, whether it’s ‘The Ear,’ which interestingly recalls the old radio drama Suspense or the more chilling ‘In the Haunted Darkness,’ which puts into words the feelings of likely more than a few people, sadly. More importantly, those stories without a deaf character highlight the most crucial takeaway: a deaf writer can world-build and set scenes as well as anyone.” —Dave Galanter, author of Troublesome Minds

MJ played peekaboo with wallabies on the University campus in Armidale, New South Wales, Australia, then fell in love with the Northern Lights in Alaska. She learned to use the Massachusetts Bay Transit Authority (MBTA) in Boston and later spent time on the beaches of Baja El Norte, Mexico. She now blogs and photoblogs from her Hobbit hole in East Texas. She's written news, opinion, short stories, technical manuals, blogs, newsletters, legal documents, and regulation manuals. If you've got a letch to pass the essay portion of the bar examination, she's written a workbook published by Aspen Legal to teach you those skills. Presently, she’s creating a series of memoirs, a book of family history, horror and urban fantasy short stories and novellas, and an urban fantasy novel featuring a kick-ass female main character. MJ is a member of the East Texas Writers Guild. View all posts by mjgraham1949

Recollections of a Tundra Dancer