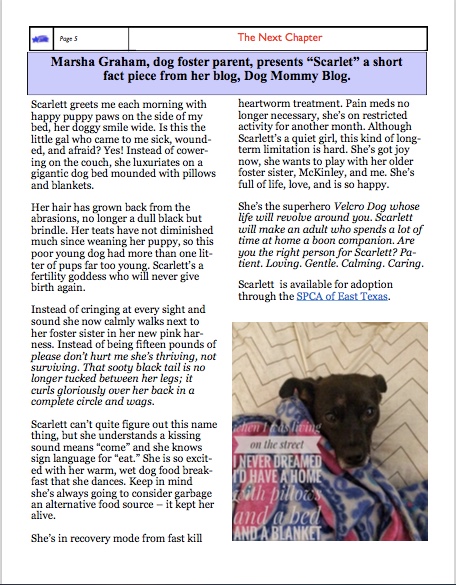 I’ve written a bit for The Next Chapter, a feature of the East Texas Writers Guild.   This is a screen capture of the February 2017 issue.  This is a very active writers group and I highly recommend it.

Scarlett has since gone on her a rural abode, far more her style. And with changes where I live I can no longer foster pups, which is a sadness.

MJ played peekaboo with wallabies on the University campus in Armidale, New South Wales, Australia, then fell in love with the Northern Lights in Alaska. She learned to use the Massachusetts Bay Transit Authority (MBTA) in Boston and later spent time on the beaches of Baja El Norte, Mexico. She now blogs and photoblogs from her Hobbit hole in East Texas. She's written news, opinion, short stories, technical manuals, blogs, newsletters, legal documents, and regulation manuals. If you've got a letch to pass the essay portion of the bar examination, she's written a workbook published by Aspen Legal to teach you those skills. Presently, she’s creating a series of memoirs, a book of family history, horror and urban fantasy short stories and novellas, and an urban fantasy novel featuring a kick-ass female main character. MJ is a member of the East Texas Writers Guild. View all posts by mjgraham1949

Recollections of a Tundra Dancer